Learn how to master DUPLICATION,
generate massive MOMENTUM in your organisation
and MASTER leadership to achieve your FREEDOM lifestyle.

If you are dreaming about living life on your terms, then you’ve realised money is right up there with oxygen when it comes to freedom. It may not be the most important thing but there’s not much flexibility without it.

Many people find network marketing as being the right vehicle to achieve money and time freedom but they start, don’t have the right training or mentorship and soon give up and become a statistic of the industry.

At Freedom Creators we will teach you the how to’s to create the much needed financial freedom you’ve been dreaming of. We give our clients not only the valuable education and the toolset in order to create a life of their dreams but also introduce multiple streams of income and give an insight on living life full time.

So if you are frustrated in your business, maybe its not going as fast as you would like, or perhaps you feel like you are running but not getting anywhere, or just quite haven’t figured out how to duplicate your organisation then you are definitely at the right place.  Depending on where you are at, choose the right program suited to your needs and goals.

Over $1 Billion in Revenue Generated

Helped create many 6,7 and 8 figure Earners

Efrosyni has been building businesses and residual income streams through a number of avenues for over 20 years.

For 15 years Efrosyni worked in the corporate world and was highly sought after by some of the leading companies in the film and media industry having worked and representing various companies from Warner Brothers, to Village Films, MIX FM radio and one of the top Radio PR companies in the UK. During that period she was able to dramatically increase the revenue of various companies and in some cases even quadrupled their revenue within 2 years.

In 2008 she came across the world of free enterprise and embarked on an exciting journey creating a life of true freedom. Through this journey she has been able to set up 3 of her own businesses, 2 of them being in real estate and was able to generate millions in revenue.  However adversity hit and within a short period of time almost lost everything.

But as one of Efrosyni's favourite mentors said: ʻAdversity causes some people to break and some to become record breakers!” Within 3 years she was able to turn things around and is now responsible for creating an organization that has generated over $800 million in revenue and growing exponentially in 50 countries.

When Efrosyni coaches and mentors she gets results, and the success stories  she has created are a testament to that.

Melanie first started in network marketing in 2012 and it was the answer to her prayers. She had been looking for a way to reduce the hours of the multiple jobs she had collected and have more fun in her life. Originally Efrosyni was her mentor and within a short period of time she was able to walk away from her several part time jobs and create complete freedom. In fact for 1 year she was able completely enjoy it work free and travel to 15 countries enjoying her lifestyle lifestyle that combined a balance of fun, freedom and giving.

However, recently she realised her passion for helping people and partnered up with Efrosyni and as a result has been able to live in 3 different continents, helping create many success stories and has played a valuable role in the international expansion of their business.

Melanie when she coaches people is raw, but keeps it fun, and working with her you can be assured that not only will she push you out of your comfort zone and help you grow but also help you enjoy the journey.

Both these ladies are top of their game when it comes to helping, leading and mentoring individuals and teams in sales and leadership and network marketing.

Freedom Creators provide a range of courses that will take you from beginning in network marketing to earning 6 and 7 figures if followed meticulously. Additionally we provide one on one coaching time for different levels in the industry.

These courses are for anyone who has believed there is more to life than just a 9-5, that life was meant to be enjoyed, and wants to reach their highest potential.  However you will need to be willing to put in the work and step outside of your comfort zone to discover just how far you can go.

During the next 30 days (starting 1st of September), we will be working together in a private group towards multiplying your team, your results and your success.

During this program you will learn the seven most common mistakes that people make in their network marketing business. Even making just one of these mistakes is enough to make your business plateau or even go backwards.  When you purchase this program you will be able to identify whether you are making any of these mistakes and how you can fix it to grow your business faster.

This program is designed to take you from zero to network marketing hero. It can either serve as a refresher on the basic skills or introduce you to the how to’s for the first time. It’s an earn-while-you-learn type of course which includes action taking in between each module!

During this course, you will learn:

Our accelerate 90 day plan is not for the light hearted but for those who have self- discipline and motivation but are lacking the tools and knowledge on how to proceed with speed. The 90 day plan is designed to help you go FAST to the next level or rank with your company through full immersion.  This is the most comprehensive program in the industry and is a powerful tool that has been tried and tested. In fact its a similar program Efrosyni used when she was frustrated in her business and was able to go from earning a few hundred $ per month to earning her first 5 figure month within 120 days!

Since then she has used the same program to help dozens of people earn 5 and 6 figures within a few months of using this program and even more, over longer periods.

During this course, you will learn:

One on one and group coaching sessions are available with our trainers - this is for people who are willing to go the extra mile and invest in themselves. During these sessions a trainer will be able to tailor the coaching to your specific needs and goals and hold you accountable from session to session. We will be there to mentor you, give you the tough love when it is needed and customise what we say by discussing the current challenges you maybe going through and the goals you wish to achieve. 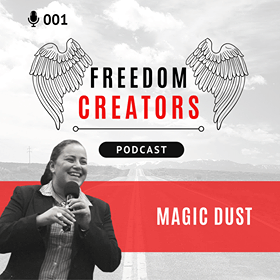 Marc Accetta has been in the network marketing industry for over 30 years. He's one of the most sought after trainers and speakers and has helped create over 1,000 first time millionaires.

Over the past 10 years, I’ve watched Efrosyni start from nothing to growing an organization of over 350,000 people. Her commitment and dedication to building leaders is unrivaled as she’s not only earned millions of dollars herself, she’s helped dozens of others do the same. Her knowledge and skill when it comes to team building, event promotion and leadership make her one of the most powerful trainers I’ve ever seen in the network marketing profession. What I love even more about Efrosyni is her level of commitment and integrity. There are few people I would trust with my own children and she is one of them. Not only do I have the highest level of respect for her, she’s also become one of my best friends. If you ever have the opportunity to learn from her, soak it in and devour her content as it will most certainly empower you to achieve your goals.

Matt Morris is a Speaker, 10x Best Selling Author, Trainer and has 25 years experience in network marketing.  In his current company he has generated $2 Billion in Sales and 1 million customers.

I have known Efrosyni Adamides for over ten years and had the pleasure of working with her on numerous occasions both in collaboration with our mutual colleagues and also individually on specific projects.  Her commitment to any task is exceptional and during my four decade career in network marketing I would place her in the top ten of any list I may draw up to identify `servant leadership'.

In this regard Efrosyni excels at coaching and mentoring individuals and associated groups toward network marketing success and is more than qualified to do so.  I would highly recommend anybody committed to their future in that industry to work closely with her and establish the relationship of understanding she can deliver.

She exemplifies how to focus on the practicalities of task and the deliverable processes required to get the results she already believes are within grasp. Add to this her loyalty and dedication to others, whom she supports and the undoubted fact that one would be able to rely on her any time she promised to be engaged towards a mutual goal or task.

Finally, in my experience, I have rarely come across someone as `tenacious' as Efrosyni Adamedes.  What you see is what you get with Efrosyni and what you get is the chance to be associated with a focused and success minded winner.

Peter Powderham has over 40 years in the Direct Selling / Network Marketing Industry.  He is the highest earning representative and has created the largest MLM organisation in UK MLM history.

Has worked (field & corporate) with 5 previous MLM companies when they achieved over $1bn in sales and is one of the top 100 Worldwide income earners in the history of network marketing.

There are some people that cross your paths and have a profound positive impact on your Journey. Efrosyni Adamides and I met 10 years ago but it's only in the last 2 years that we started to work together seriously, and during that time she has helped myself and my wife to reach a 6 figure income. What makes Efrosyni stands out the most is not just her work ethic, integrity and loyalty both in business and friendship alike but her ability to help and guide you in achieving any financial goal.

Edwardo and Justina have been in network marketing for 10 and 5 years respectively, have created a team in the thousands and are both two of the strrongest leaders in the Baltics for WorldVentures.